All Events Announcements Media Release News
Celebration of the 204th anniversary of Taras Shevchenko’s birthday by the Ukrainian Community of Queensland Inc
March 17, 2018 By Peter Bongiorni
0

What a concert dedicated to the 204th anniversary of Taras Shevchenko’s birthday we had on Sunday 11 March! It was a celebration of music, dancing, singing and recital. We welcomed our rising star, Alla Yarosh, whose voice is going from strength to strength. She sang a solo and a duet with Zakhar Kriuchkov, who has joined our community only recently. Zakhar is an accomplished singer and guitar player who performed a number of songs on his own and also accompanied by his charming daughter Camelia.

Larissa Brooker was a star of the concert. Her beautiful voice and artistic performance never stop surprising and enchanting. We are so lucky to have her in our community.

For lovers of the dramatic arts, we had Lyalya Nisina and Valentyna Shumyk beautifully reciting poetry and Valentyna also performing two solo dances.

Everybody’s heart was moved by two young boys, Nazarchyk Kovtun and Volodya Volochiy, reciting Taras Shevchenko’s poems. It is so good to see the young generation continuing the traditions of their parents.

Svitlana Yarosh put a tremendous effort into putting the concert programme together and making a warm introductory speech and generally conducting the concert.

It is hard to describe audience’s feelings, with so many generations present – those who came to Australia after WWII, those who were born in Australia and those who have only more recently left Ukraine.

Everyone enjoyed the varenyky and kotlety prepared by out hostesses Daria Piskor, Mary Hughes, Marika Cuda, and Jacqueline Bongiorni. This home-cooked style meal was very tasty and comfortingly familiar to the majority of us.

Peter Bongiorni and Viktor Voytinov were on call to serve a variety of beers (including Ukrainian beer), wines and spirits.

The general atmosphere was friendly. Many met with old friends, whom they have not seen for a long time and there were many newcomers, who hopefully will come again.

The Ukrainian Community of Queensland received generous gifts from Dr Pavlo Angelutsa and Valentyna Shumyk. Dr Angelutsa presented our community with a beautiful embroided Taras Shevchenko portrait by Зіновій Дерех and a print in Ukrainian folk motifs by Світлана Солдатова.

Valentyna Shumyk made a moving speech imploring all Ukrainians to stay together despite any differences that may be among them. As a symbol of such unity, she presented a beautiful heart-shaped glass tray.

Stephan Chomyn, our President, made a short but very focussed speech welcoming everybody and reminding how important celebration of Taras Shevchenko’s anniversaries were for our community, symbolising a link between generations of Ukrainians that made Queensland their home. He concluded the event by thanking everybody involved in its preparations and delivery.

We also thank Borys Daniljchenko and his wife Jenny for filming the event and taking photos. 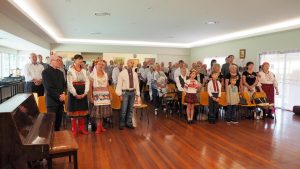 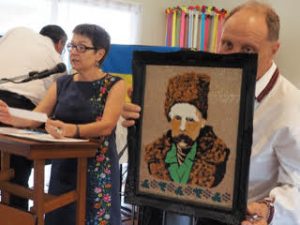 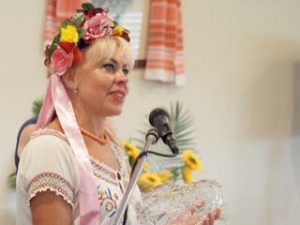 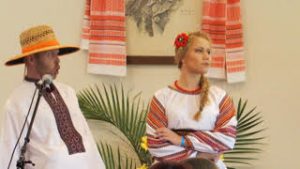 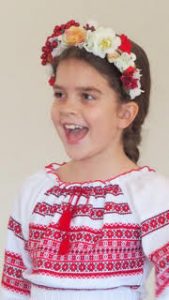 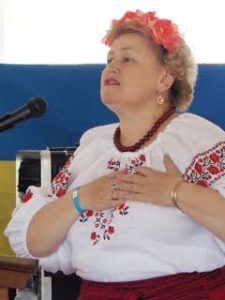